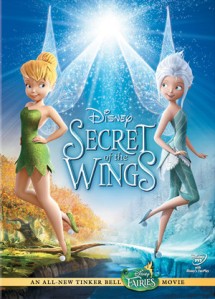 I loved Tinker Bell And The Secret Of The Wings, to the point that I think this is my favorite! It could have easily been just one mess of a too quick info dump but the movie was beautifully done, which is all the more commendable as I believe this is the shortest one! It could have easily been a cheap “pre-Frozen” production, but while I see similarities in the design, this is the only thing. Both movies are very different. I love the look of the Tinker Bell movies. The animals in this one made for a cuteness overload! I wanted the Lynx every time I saw the feline on screen!

I think that the story was very well handled, both about the personal and the larger scales. I was happy to see Tinker Bell find out she has a sister. I like how she and Periwinkle look alike and yet are very different. I think that working on how they were sisters but had their own personalities regardless, was clever, including in looks. It was also interesting to see the Winter Woods beyond a couple of locations and characters. I think it did a lot to how well executed the movie is. I liked how we even got to see them little, albeit for very brief moments.

It was also nice to see both their groups of friends, as it would have been too easy to just show Periwinkle in Tinker Bell’s world without a hint of her own environment in terms of relationships. I liked the Keeper a lot! He was a great character. Finding out about the history behind the separation between Pixie Hollow and the Winter Woods was a beautiful scene, especially in light of the confirmation later on about this story truly being about Queen Clarion and Lord Milori. Lord Milori was a great character and I liked how his disability was part of who he was, but shown as just one of his many facets, not in a reducing fashion, especially as it was only truly revealed late in the movie. I admit that I didn’t think twice about the fact that he flew on a bird most of the time. I just thought that it was pure Winter Wood fashion, especially as he is far from the only Winter fairy to do that!

The whole ending with relationships being rekindled or new ones blossoming with the two seasons now interacting more was great especially as seeing many of the recurring characters now making contacts and forming bonds with Winter fairies added a lot to the movie. I like that while Tinker Bell is the main character, many others have room for screen time and development too.